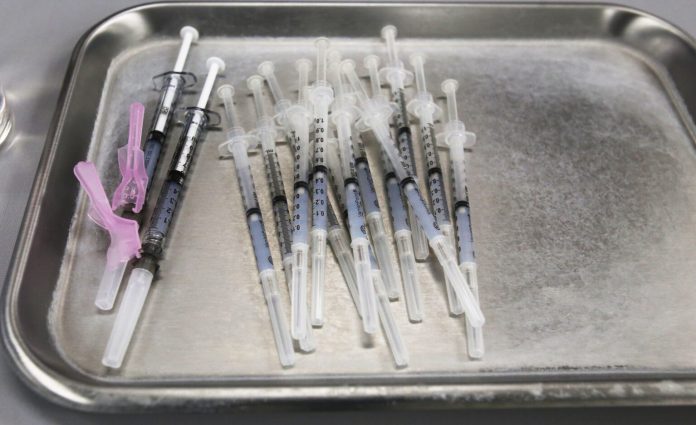 SANTA CRUZ COUNTY—Though the use of the Johnson & Johnson vaccine will be delayed for an undetermined amount of time, the pause of the single-dose inoculation is not expected to significantly slow the county’s vaccination efforts.

That’s according to Santa Cruz County health officials, who at a virtual press conference on Wednesday said that they are still on pace to have offered a vaccine to every county resident by July 31.

Santa Cruz County spokesman Jason Hoppin on Tuesday said that only about 3,600 doses of the Johnson & Johnson vaccine has been distributed to the County Health Services Agency (HSA). That vaccine, Hoppin said, has been primarily used for incarcerated individuals and people experiencing homelessness.

The Homeless Persons Health Project (HPHP), which has spearheaded the county’s vaccine efforts for those experiencing homelessness, made the switch to the Moderna vaccine Tuesday. Hoppin said that the shift might cause some operational challenges because of the vaccine’s two-dose administration, but that HPHP leaders were not too worried about the change.

“I talked to them this morning, and for those two-shot doses they’ve had pretty good success in getting people vaccinated,” Hoppin said Tuesday.

Despite the pause, Hoppin said, HPHP clients are still asking for the Johnson & Johnson vaccine.

The use of that vaccine halted Tuesday morning after the Food and Drug Administration (FDA) recommended a “pause” while it investigated rare side effects possibly associated with the shot.

Six cases of severe blood clots have been reported by Americans who have recently taken the Johnson & Johnson vaccine, according to a joint statement from the FDA and Centers of Disease Control and Prevention (CDC). More than 6.8 million doses of that vaccine have been administered nationwide.

“Right now, these adverse events appear to be extremely rare,” the statement read.

The CDC’s Advisory Committee on Immunization Practices met Wednesday, but did not update its recommendation for the vaccine’s use, according to multiple national media reports.

Deputy County Health Officer Dr. David Ghilarducci at Wednesday’s press conference said that at least 72,000 of the county’s roughly 270,000 residents have been fully vaccinated, and another 50,000 have had at least one shot.

In addition, the vast majority (86%) of those 65 and older have received at least their first dose.

“I’m just so proud of our county and how well we’ve been able to utilize our limited vaccine supply,” Ghilarducci said.

The county could see herd immunity when 60-75% of the population is fully vaccinated, Ghilarducci said. That, according to the latest modeling, could come as early mid-May.

Of course, Ghilarducci said, the arrival of a variant that is resistant to vaccines, which has not yet been confirmed, or a refusal to receive the shot from a large portion of the population could delay that prediction.

“That’s the most damaging potential of this Johnson & Johnson news, is that it’s going to create distrust,” Ghilarducci said. “If we do not continue the pace of vaccination… we’re going to need to look at strategies to assuage their fears (of the vaccine.)”

Hoppin said HSA this week would receive 3,800 doses, and that only 300 of them would be of the Johnson & Johnson vaccine.

It is still not yet known what effect the pause will have on other distribution methods that have used Johnson & Johnson, primarily the participants of the Federal Retail Pharmacy Program such as CVS and Walgreens.

A statement from the White House said that the pause, “will not have a significant impact on our vaccination plan.”

The Johnson & Johnson vaccine, according to the statement, makes up less than 5% of the doses administered in the U.S. to date.

“Over the last few weeks, we have made available more than 25 million doses of Pfizer and Moderna each week, and in fact this week we will make available 28 million doses of these vaccines,” the statement read. “This is more than enough supply to continue the current pace of vaccinations of 3 million shots per day, and meet the President’s goal of 200 million shots by his 100th day in office.”

The mass vaccine site in downtown Watsonville, for example, no longer had openings for this weekend on Thursday morning. More appointments are expected to be made available next week.

When asked about how dire the situation is for local businesses despite the recent relaxing of Covid-19 restrictions imposed by the state, Scotts Valley...
Read more
Business

Last October, when Mayor Derek Timm learned the community had been selected by Target Corp. as the site of one of its next locations,...
Read more