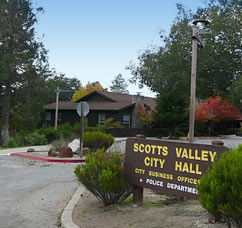 SCOTTS VALLEY—The Scotts Valley City Council at its Wednesday night virtual meeting got its first look at a slew of upcoming changes to its waste disposal standards mandated by state lawmakers.

Thanks to Senate Bill 1383, which was signed into law by then-Gov. Jerry Brown in 2016, Scotts Valley over the next 10 months will have to provide every ratepayer a new collection bin for “organic” material, defined by the law as green waste, wood waste, food waste and fibers, such as paper and cardboard. The law also requires that jurisdictions reduce the amount of organic material they dump into landfills by 75%, and increase by 20% their edible food recovery—or food that could be donated instead of thrown in the trash bin—by 2025.

These changes and several others, City Attorney Kirsten Powell said, will be a “significant” strain on the city’s resources.

“It really is a significant lift for staff just to get it started and just the ongoing costs that are going to be incurred by, ultimately, the customers. [They’ll] be paying the majority of this,” Powell said.

It is unclear how much more ratepayers will have to fork up for the city to enact the changes. The city is currently negotiating new contracts with its waste hauler and processor that are compliant with the law, and that new deal will most likely equate to a rate increase.

Those increases aren’t expected to come until SB 1383, advertised as the most stringent state restrictions on short-lived climate pollutants, goes into effect on Jan. 1, 2022.

Mayor Derek Timm said the League of California Cities is currently trying to write a letter asking state lawmakers to delay its implementation for at least another year, because of the budgetary strain most cities have dealt with as a result of the Covid-19 pandemic.

“They’re asking us to reach out to [State Senator John] Laird and really push his office,” Timm said. “He’s getting a lot of pushback from certain environmental groups on this, but the timing on this is just horrible to try to implement.”

But Powell said the city can’t rest its hopes on those lobbying efforts, and has to move forward with the changes.

“We are hoping that there will be an extension to the start date, but at this point we can’t wait,” she said. “Because if it isn’t extended there isn’t much time.”

The city, among other things, must do the following to adhere to the new state law:

It is likely that the various state requirements will come to the City Council in multiple ordinances over the next 10 months, Powell said.

The city will also undergo various outreach and education efforts to teach residents and businesses how to properly dispose of food scraps and other organic waste. In addition, it will need to determine how to keep track of the disposal system, and what actions it can take to monitor, inspect and enforce the new requirements.