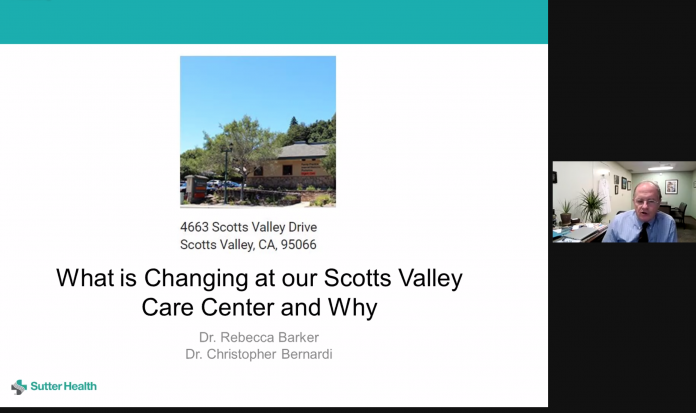 Maybe the “sense of abandonment” felt by locals due to Sutter Health’s move to nix its Scotts Valley urgent care site wouldn’t be so profound had officials included the community in its decision-making?

It was one of many questions and pointed suggestions shared during a one-hour Q&A held Monday with under-the-gun health system administrators and angry patients bewildered by impending changes to care options.

The digital meeting was hastily organized after local congressional representative Anna G. Eshoo, who chairs the health subcommittee of the House of Representatives in Washington, D.C., put pressure on Sutter CEO Sarah Krevans to host one.

Sutter, through the affiliated nonprofit Palo Alto Medical Foundation, which serves 1 million patients across San Mateo, Santa Clara, Alameda and Santa Cruz counties, recently pulled the trigger on a service shift in Scotts Valley. The move would transition its urgent care operations in the city to family medicine and a child-focused care model.

During Monday’s livestream, where patients weren’t given the opportunity to speak and had to submit written questions, officials claimed financial concerns weren’t at the heart of their rejigging of local health priorities.

Instead, administrators said, it represents a strategic realignment, as the health system plans for an influx of more than 5,000 new potential patients to the area as the region continues to grow.

Dr. Rebecca Barker, Sutter’s chief physician in Santa Cruz County, explained the difficulty of finding everyone in Scotts Valley and San Lorenzo Valley a family doctor was a big part of why the decision was taken.

“You can see all the development propping up in Scotts Valley proper and in the surrounding communities,” he said. “I’m doing everything I can on my end to bring in new patients.”

Sutter plans to reduce hours at the location from being open 8am-5pm seven days a week to 8am–5pm on weekdays, but will still take same-day appointments. Officials pledged doctors would continue to take on evening and weekend work, but wouldn’t commit to forcing them to do this, suggesting it would make retaining employees harder.

And that would be a problem, Barker said, since it’s so competitive to attract family physicians. While they’ve interviewed one doc already, they haven’t sealed the deal, she added. And while they’re on the hunt for a pediatrician, they don’t have one lined up, Barker said.

However, officials are optimistic about Scotts Valley’s chances. There’s a serious advantage to being within striking distance of Silicon Valley, and some of their prospects for three physician positions have partners who work for tech companies and can commute over the hill, Barker said.

“This is a big challenge filling those three spots,” she said, describing doctor recruitment as her highest priority. “We opened the requisition about two months ago.”

DeGehtaldi said the services Sutter is bringing to Scotts Valley will better serve people with behavioral and mental health issues—like, say, an anxiety attack—care which has been increasingly required during the pandemic, and after the CZU Lightning Complex fires.

Barker said the vast majority of these cases aren’t handled by urgent care doctors or psychiatrists, but by primary care physicians. That’s all happening online now, since the coronavirus showed up, she added.

With Sutter’s Westside Center Urgent Care location in Santa Cruz set to reopen in September, tension in the system will be easing shortly, according to Barker.

“I’m not saying that the Scotts Valley patients will ultimately go there,” she said, adding another problem is health care workers who spent a year-and-a-half on the frontlines of the pandemic are taking “well overdue vacations” this summer.

When one person asked about the problem some people have where their insurance plans charge them more money to get primary care or to visit the emergency room than if they were to go to an urgent care location, DeGehtaldi brushed off the concern.

“The standard office visit charges are the same,” he said, suggesting urgent care actually costs more with some insurance providers. “Sutter’s support for this community has been strong and important.”

When the same questioner claimed Sutter was removing care options in the area, DeGehtaldi shot that down quickly. The facts are clear, he said, noting the Palo Alto Medical Foundation has grown from just three county sites to almost 20 in recent years.

But he conceded there is one big gap in their Santa Cruz County strategy: the San Lorenzo Valley.

“Felton, Ben Lomond and Boulder Creek are getting ignored here,” he said. “This is absolutely true.”

Sutter officials have been in talks with Fifth District County Supervisor Bruce McPherson to try to fix that blind spot.

“We are going to try to engage community partners to see what can be done to provide access in the Valley,” DeGehtaldi said.

“I don’t want to give them false hope that another clinic’s going to open up in the San Lorenzo Valley,” he said, adding he’s glad to hear Sutter plans to reevaluate its urgent care decision after six months.

One commenter suggested Monday’s session wasn’t enough, since, after the initial presentation titled “What is Changing at our Scotts Valley Care Center and Why,” officials only fielded questions for about 45 minutes.

Officials said they’d wait to see if there were enough additional questions submitted to the [email protected] email address provided at the end of the meeting to warrant another.

Scotts Valley City Councilman Randy Johnson said DeGehtaldi was invited to attend a small gathering of patients held Saturday but didn’t show up. At the event, he said, multiple area residents shared about situations where urgent care saved their lives.

“It just keeps piling on that this has been and will be a top-down decision with zero collaboration,” Johnson said. “It’s business for them. It’s personal for us.”

Johnson said Sutter needs to stop complaining about Kaiser Permanente not taking a bigger share of poor, government-covered patients and come up with effective care solutions.

“They’re kind of taking the easy way out,” he said. “You have problems? Be creative.”